You might have heard of a “gender reveal” party as they’ve become quite the trend as couples finding out the gender of their baby turn it into a fun celebration! It’s a fabulous way to have friends and family involved in the announcement too. Instead of traditionally discovering the gender in the ultrasound, parents-to-be are having it secretly written down and revealed at a party. Love the idea? I’m here to show you my top tips for hosting a gender reveal party!

Traditionally, gender reveal parties stay on color scheme with baby pink and baby blue! I love this sweet color combination, so I used the two throughout the decorations and treats. You might even decorate one side of the table pink and one side blue or mix them as I did. If you don’t have a great backdrop to your party table, then create an inexpensive one by using balloons! For less than $10, a dozen balloons can create a festive, party atmosphere!

Sweet baby gifts for the parents wrapped in pink and blue can double as table décor! A craft “hat box” in blue and white is the perfect decoration for holding cups and straws for drinks. Height always helps a table so get creative and pick up baby colored wrapping paper! Stack cake stands to create height as well. If you don’t have pink or blue cake stands, stick with white or clear glass to stay cohesive in your colors.

Serve up party treats for the parents-to-be and guests! Simple market cupcakes can be instantly jazzed up with pink and blue cupcake toppers. Find these at a party store or make your own with scrapbook paper and wooden skewers. Pink and blue candies in glass vessels match the theme of “boy or girl?”! I used a lot of white desserts because they didn’t fight the color scheme, and who doesn’t love vanilla cupcakes and sugared doughnuts?

“Girl or Boy? What will it be! Pop the confetti and you will see!”
There are lots of unique and clever ways to reveal the gender, and I’ve listed several below for you to browse. For this party, I chose a confetti push-up pop themed reveal! Confetti is very trendy these days and oh so fun for parties. To make these push-up pop confetti shooters, all you have to do is wrap each push-up pop with paper (white with pink and blue ribbon is what I chose). I also spray painted the tops white so there was no way to sneak a peek of the gender. Next, whoever knows the gender (a friend, family member, or other guest) fills the push-up pops with confetti in either pink or blue. When it comes time for the big reveal, the parents-to-be (or all the party guests) pop the confetti and celebrate!

Other Ways to Reveal the Gender 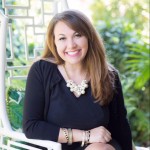 How to Maximize Storage Space in a Small Home

Lifestyle, Making a House a Home

7 Ways to Live a Minimalist Lifestyle Without Getting Bored

Hosting a Cookout Soon? Here’s How to Beat the Heat!

The Complete Survival Guide to Living With Friends

Moving in Together: Costs & Savings By City | Homes.com

Five Ways to Get Your Money Back From Bad Contractors

Out of the House

7 Things You Should Know Before You Power Wash Anything